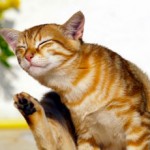 Does your pet have a flea allergy?

That’s not always the case. The chemicals in the saliva of fleas can cause an allergic response in your pets. This allergic response is called flea allergy dermatitis (FAD).  Pet parents often get downright frustrated when their dog keeps scratching and understandably so. Getting to the root of an itch is not always that simple, especially in the case of FAD. Sometimes, a dog or cat will begin to itch right away when a flea has bitten him while other times, there is a delayed response.

It can take days for the allergic reaction to kick in, which explains why sometimes it seems like fleas can’t be the culprit! FAD is characterized by a few tell tale signs. The first being, you guessed it, itching. Your dog will appear as if he’s fighting a persistent, nagging itch! Another sign is red bumps. These bumps are small and often times crusted over.

If your dog is itching, you should check his thighs, belly and back. Often times, you may also notice open wounds or sores. This is ordinarily the result of the persistent scratching and chewing. Additionally, you may notice flea dirt, small black specks that look like dirt or pepper. This is actually the flea’s excrement. Gross, I know. If you want to discern if the “dirt” is flea excrement, attempt to comb out some of the “dirt” onto a piece of paper or paper towel, anything light in color. Pour water on the dirt and wait sixty seconds. If it turns red then it is flea excrement. The changing to a red color isn’t magic; in fact, it’s just the blood that has been dried up. There are many conventional and natural flea treatments and prevention remedies out there. While natural products are safer for pets, there may be times when you must turn to conventional medicine.

How do you keep fleas off of your pets? We’d love to hear what works for you!

What are bladder stones?