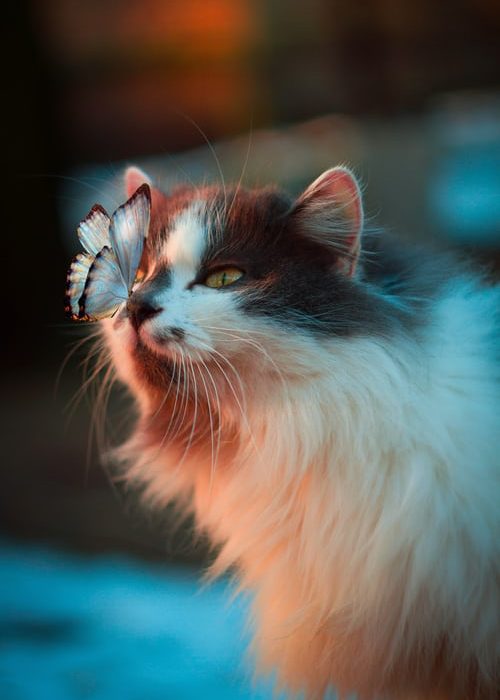 Hairball Remedies for the Cat sitter in Dallas

National Hairball Awareness Day was the last Friday in April. Yeah, I missed it too, who knew? This Dallas cat sitter did not. Oh well, there’s always next year!

What are hairballs, and why do cats get them? Kitties have barbs on their tongues or papillae that face backward. As they groom themselves, licking their fur, it sticks to the tiny barbs and gets swallowed. Most of the hair passes from the stomach through the intestines and out of the kitty with digested food as feces. Some of the hair, however, stays in the stomach, collecting over time. Eventually, a small mass or ball of hair forms and will make its way back out through the esophagus. Cat owners will recognize the hacking and gagging noises as kitties produce a slimy tubular-shaped clump of hair mixed with saliva and bile. Unsuspecting cat owners have probably stepped on a slimy “trichobezoar” or two in the time, sharing their lives with their beloved kitties.

Long-haired breeds are more susceptible to hairballs and need more attention to prevent them. Short-haired kitties are not exempt from getting hairballs and certainly cough up their fair share. In the warmer months, and in places where it’s seasonably warm like Dallas, when cats are shedding more than usual, hairballs naturally increase in frequency.

While occasional hairballs are normal, vomiting or excessive coughing is not. If either of these are present and persist, seek veterinary help. Another major concern is blockage from a hairball, while rare, it does happen. If your cat is lethargic and refuses to eat for more than a day, or has had repeated episodes of unproductive retching, consult your veterinarian immediately.

It’s possible that a hairball, instead of being regurgitated, has passed from the stomach into the intestines and is creating a potentially life-threatening blockage. If a blockage is detected, surgery may be the only way to remove the hairball. Alternatively, non-surgical treatment will focus on protecting the intestine through several days of care that includes intravenous fluids and the use of a laxative to help move the hairball through the digestive tract.

The best way to deal with hairballs is to prevent them. Daily brushing to remove shedding fur is the first prevention method to try. There are natural remedies such as adding fiber to your cat’s diet. Canned pumpkin or pumpkin powder is a great way to add fiber to the diet. Small bits of fruits and veggies such as apples or carrots added to kitty’s food may also help. Hairball treats such as Temptations Hairball Control are available at pet stores, grocery stores and, of course, Amazon. Other natural remedies include laxative or lubricant gels given about twice a week containing slippery elm, marshmallow, or papaya. Also, a teaspoon of fish, safflower, or flax oil added to kitty’s meal can coat a hairball, allowing it to pass through your kitty’s system.

With a little prevention, you can ease your kitty’s struggle with hairballs and make your life a little easier too. Stepping on a wet and slimy hairball is such a yucky way to ruin a day! For you or your Dallas cat sitter.